I was lucky enough to finish my training at The Data School a couple of weeks before the contest was open, and had some extra time to prepare. In this blog, I’ll be taking you through the design and the thinking process of my winning Iron Viz “The Global Journey of Refugees”. I will also be sharing some things I found helpful and some I wish I had done better to look out for when approaching yours.

The Data and Figuring out the “Story”

The theme for the qualifier contest was migration and admission of refugees to the United States. Participants were required to use a dataset provided by The Associated Press to track refugees’ movements from around the world into the U.S. for resettlement under the U.S. Refugee Admissions Program.

I started by exploring the dataset to get an idea of what’s in there, and also to be on the right track when I do my research, as the topic was new to me and needed some understanding of the different types of refugees’ admissions.

After a couple of days of researching the topic and exploring the data, I thought of few potential stories; from covering migration into the U.S. in general to just focusing on one region or even one state, and if refugees migrate to one place more than the other? If so, why? I also thought about how Trump’s administration slashed the cap on the number of refugees admitted to the U.S. I, therefore, built a set of worksheets for each potential idea/story to see if I can find something interesting that I can keep or focus my story on.

I usually tend to first research the topic, come up with potential ideas and then test out them in tableau by creating a set of worksheets for each potential idea/story to see if I can find something interesting in the dataset.

Couple more explorations and I couldn’t find many interesting or unique angles to take, especially when I wanted to take a different approach for this visualization and such an important topic. However, going back and forth through the rules of the contest, I found the following:

Optionally, you may use any additional public data set of your choosing to supplement your analysis.

Great isn’t it? I knew by that time that I would take advantage of this opportunity and started exploring the topic globally to have a better understanding of the global migration state.

Given that each country has its own unique story, I thought about focusing on the global picture while giving context to each country. I idea seemed to be interesting, and also seemed that it would encourage the end-user to explore the dataset and interact with the visualization to find out more about both levels; however, that seemed too broad and I wouldn’t have had the time to find context for each country before the submission deadline.

During the process of research, data collection, and analysis, which I usually do at the same time when I work on personal projects, I found out that ~84% of the world’s refugees come only from 10 countries. Undoubtedly, this discovery allowed me to proceed with my idea and decided to focus my story on those countries and their refugees’ journey; starting from their origins (where they come from) to their first asylum country (where they seek asylum after leaving their home country initially), and finally resettlement (where they resettle and start their new lives). 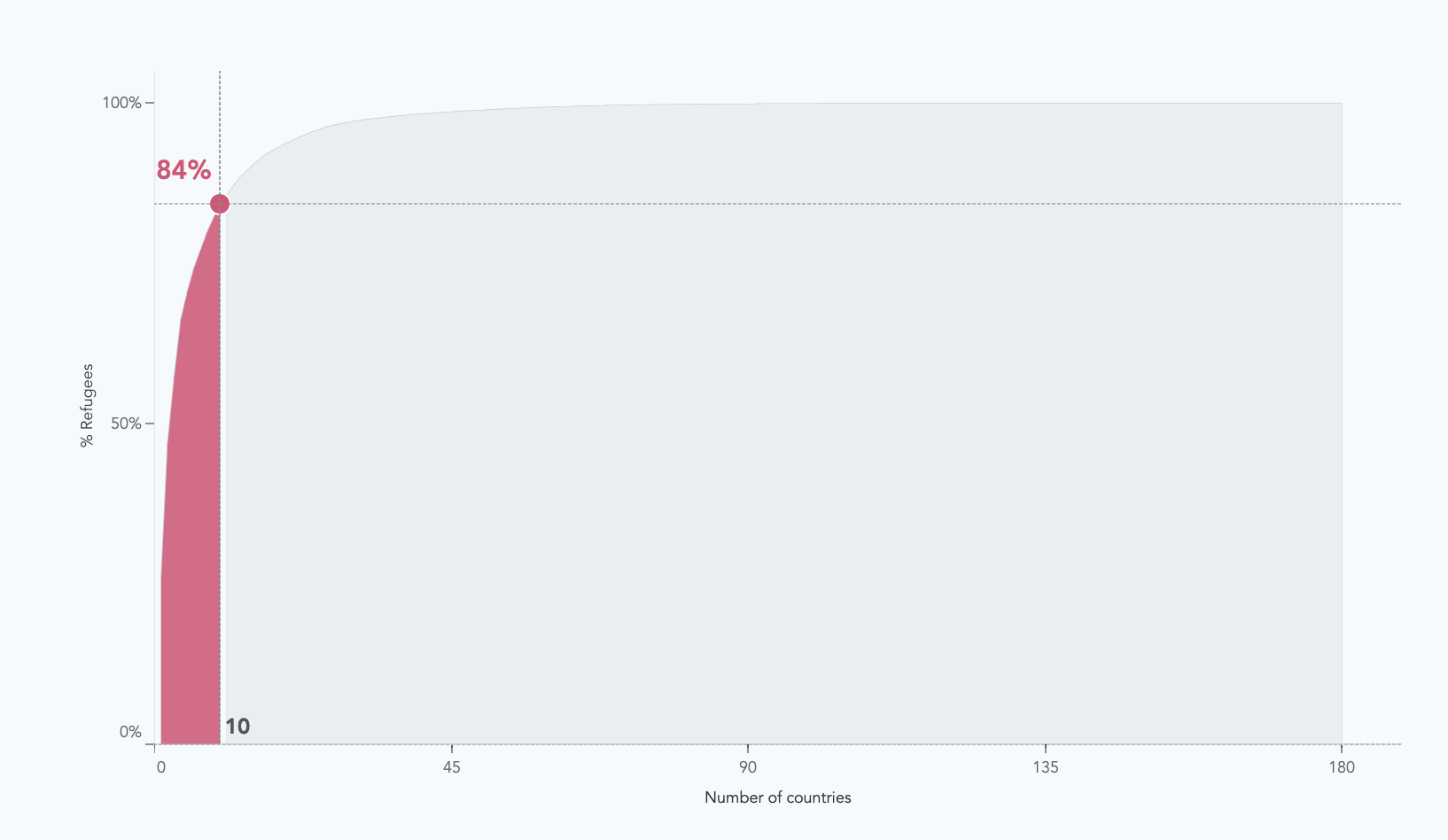 So, for few days of researching, collecting data, cleaning, and analyzing, I thought I figured out my flow and how I want my story to come across, and I was ready to start the actual build in tableau.

If I was to do this again, I would have written down the flow of my story, so I can have some guidance and something I can relate to, given the scale of the project.

I started thinking of refugees’ journey in a chronological order to help drive the story more naturally, and therefore, I started with the origins section.

Looking closer at the data, I found out that most of the top 10 countries are mainly in the Middle East and Africa, so using a map to convey this insight was the first thought that came to my mind. 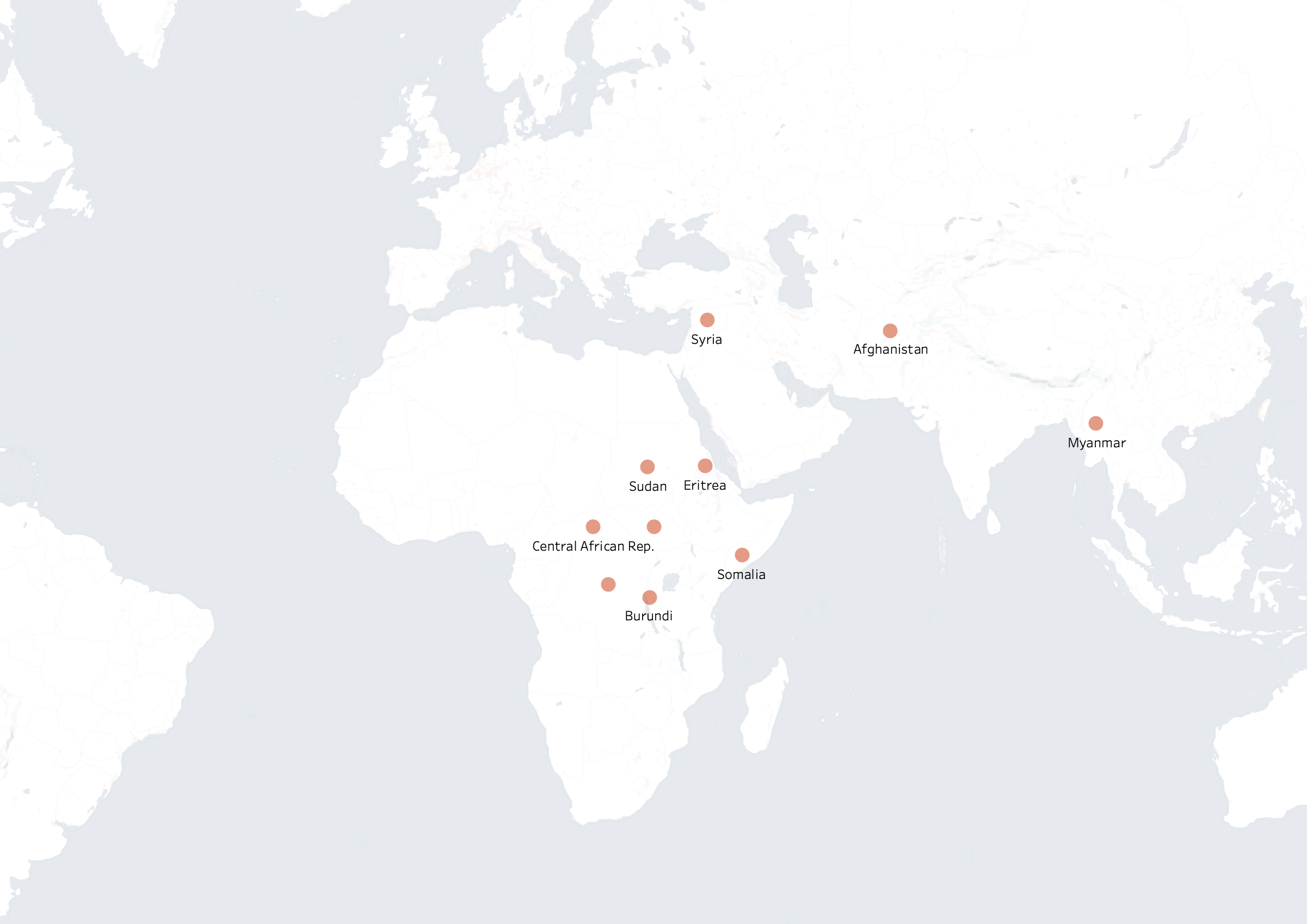 Map of the top 10 countries

However, default maps in Tableau are no way different, unless you’re someone who can make elegant beautiful maps, and I don’t think I was that person back then. So, I wanted to use a map slightly different than normal.

I remembered by that time a visualization that was stuck in my head made by Alexander Varmalov, “Freedom of Press”. I just loved the idea of creating a map with connecting lines from locations of countries and attached to a bump chart to show rank over time. The idea seemed visually appealing to me, but not only that, but it also seemed very useful to my story, especially because it provides both geo context and actual trend insights, all bounded in one concise container. So, I decided to give it a try and see if the chart is insightful in my story.

You may have noticed that I didn’t start building my visualization in order from the start. I usually tend to build pieces of my dashboard separately and start with what I know, especially when creating long-form dashboards with separate sections.

So, I divided the task into 3 components: a map (which was straight forward in tableau), lines extending from locations of countries on the map, and a curvy bump chart connected to those lines.

I took on the opportunity and used one of The Flerlage Twins templates to create a curvy bump chart, so half the job was fortunately done.

The main goal back then was to create lines coming out of each location of the 10 countries. I didn’t know where to start and downloaded Alex’s workbook, but it was out of my depth at the time to re-create his chart in a way that fits my data, so I knew I had to come up with another way to create it myself.

I don’t want to bore you with details of creating those lines, but I nearly spent a week to get them to work the way I wanted using Alteryx and some help from The Flerlage Twins data densification blog. So here’s some of the progress going through the process: 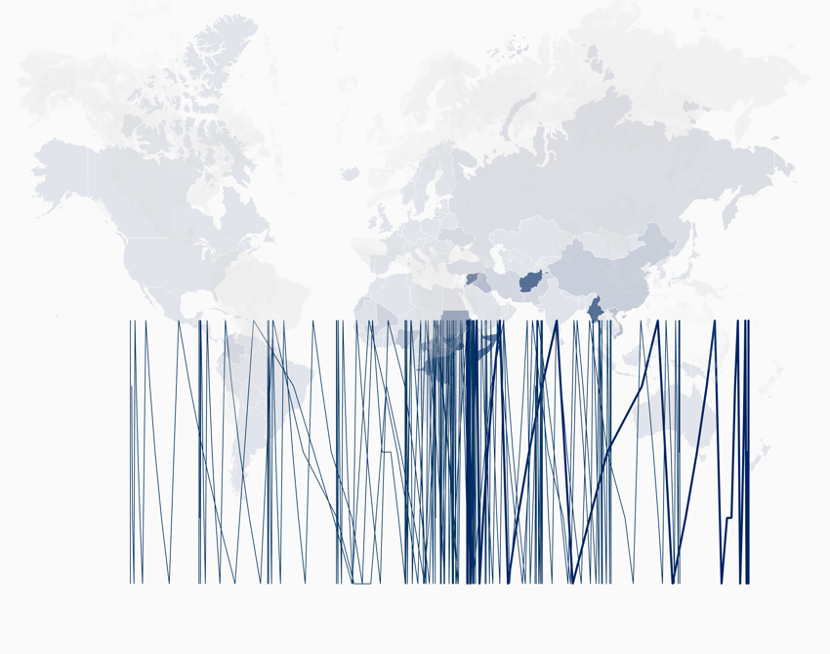 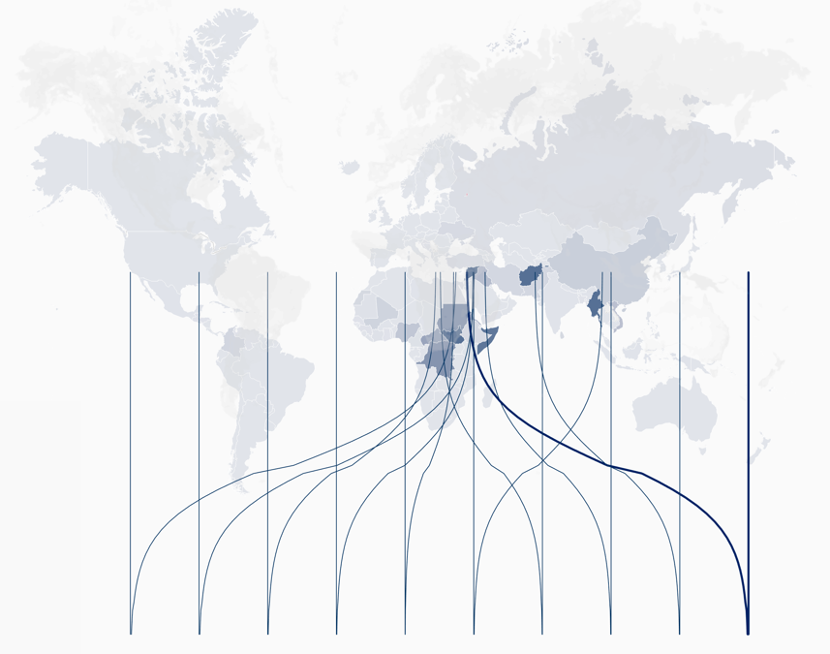 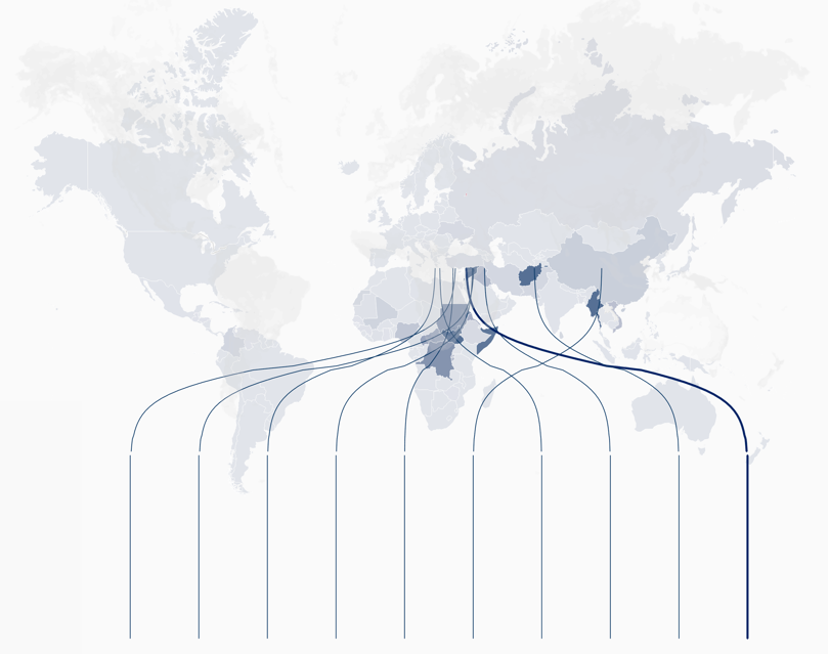 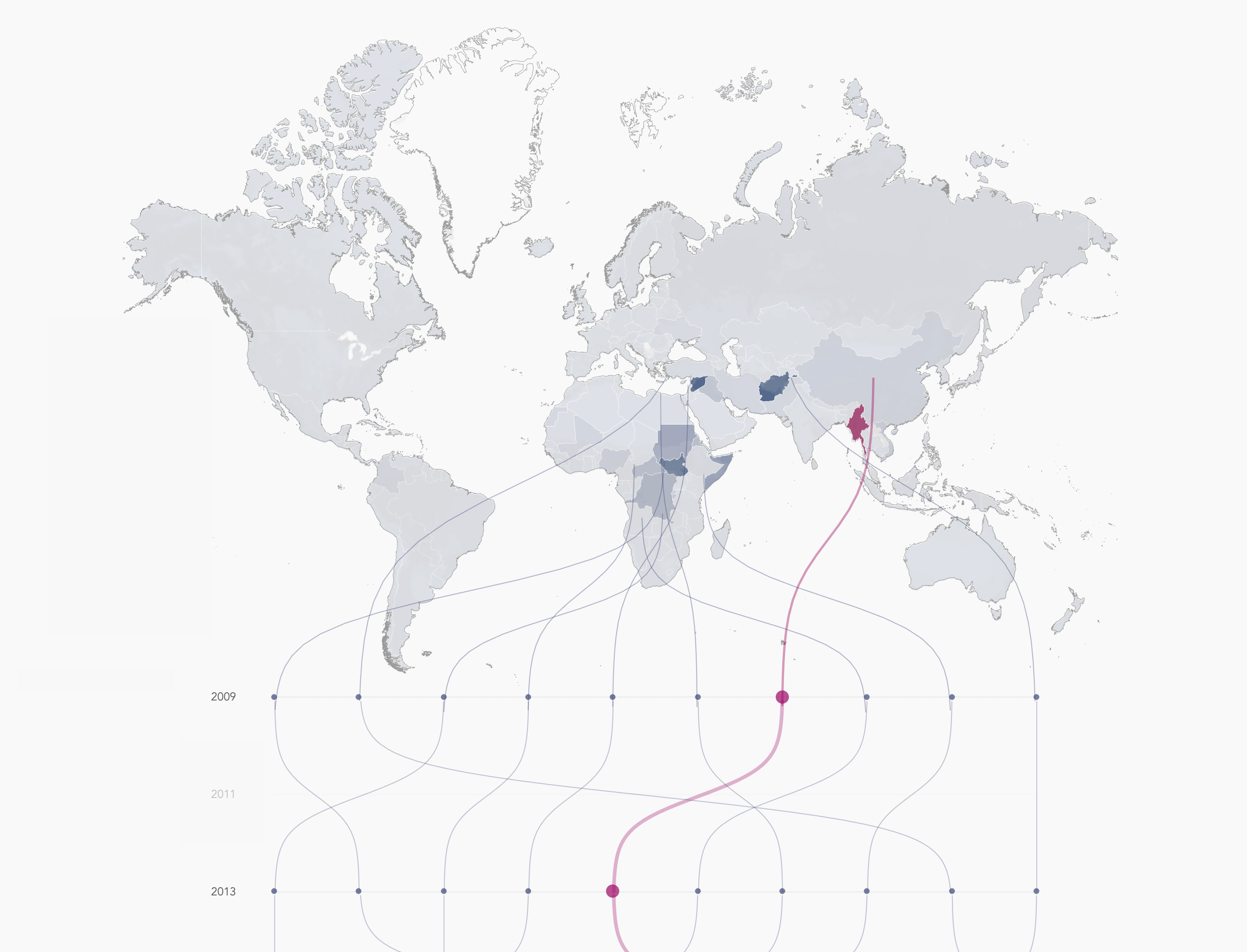 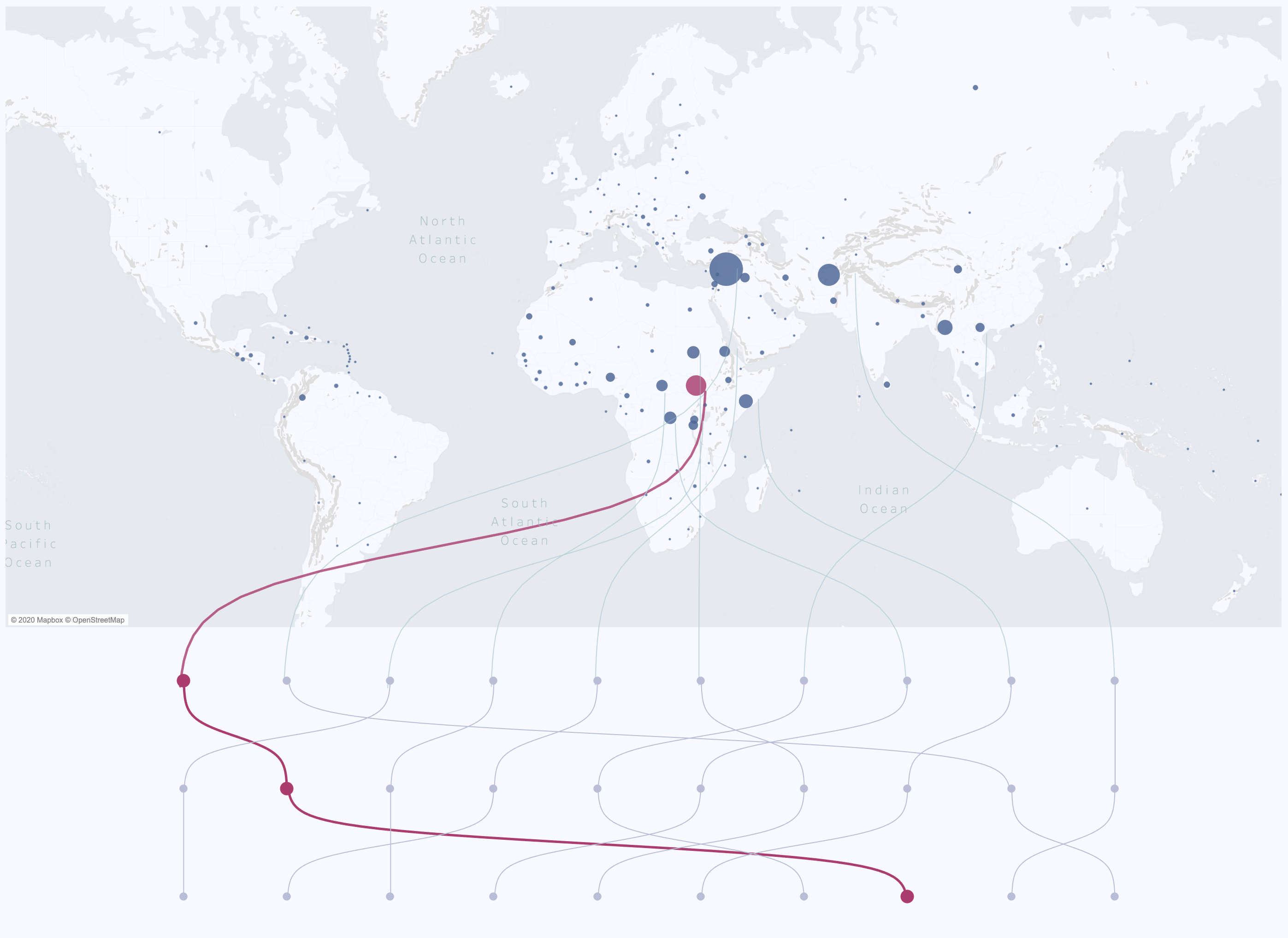 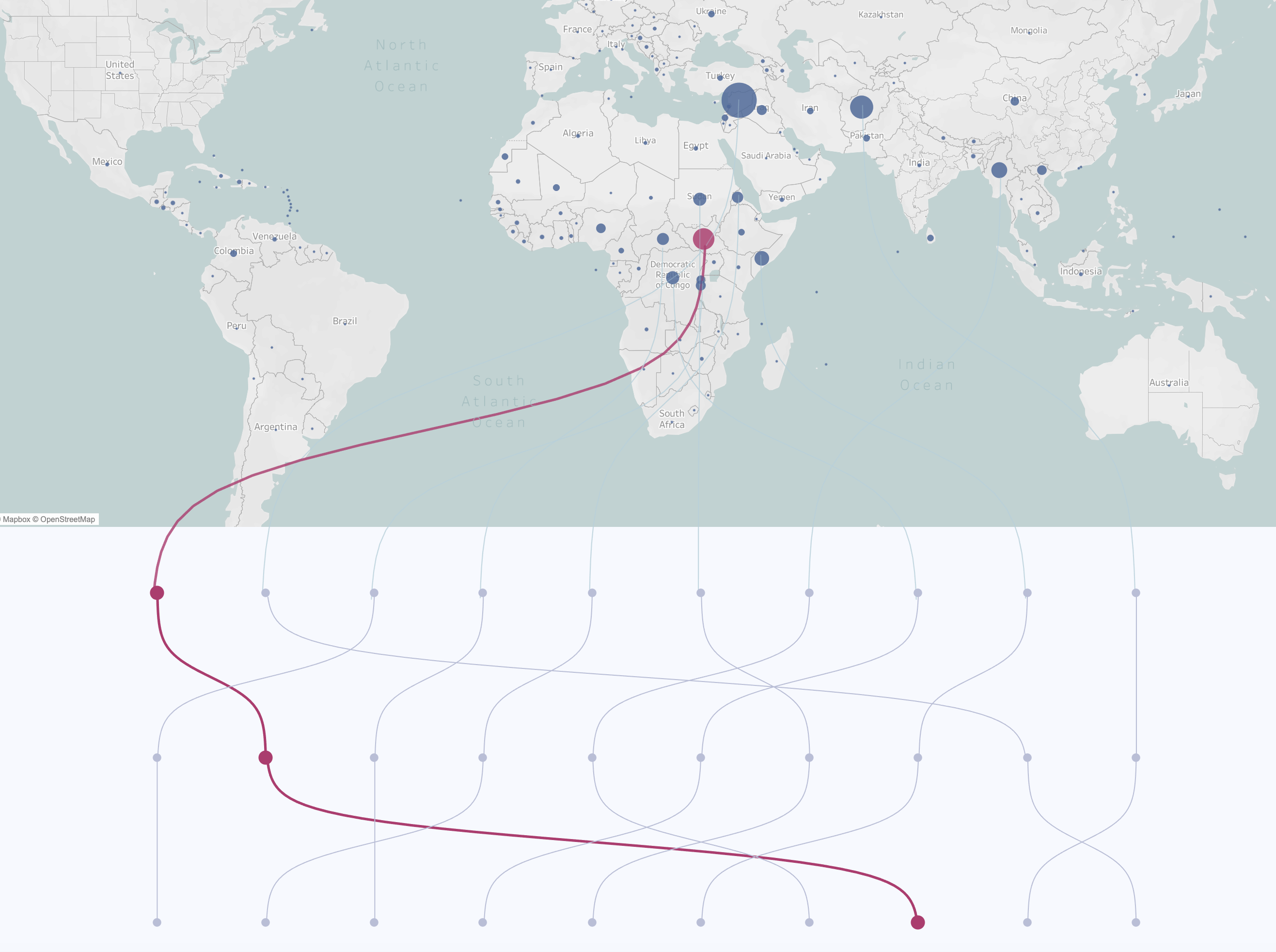 I usually tend to apply and experiment color as I move forward with the build until a color palette sticks with me.

Now that I have the lines kind of sorted, the whole piece felt a little weird and there was something not quite right. It seemed too busy with: unnecessary labels, there were many countries irrelevant to my story and most importantly, the map was taking a huge space, and the user would need to scroll to see the remaining parts of the chart, which is not something I would like to experience myself.

With a couple more experiments and feedback, it seemed that reading the bump chart vertically for my visualization wasn’t intuitive and was putting too much cognitive load on the end-user, and wasn’t helping the whole piece to stand out. I decided back then to give it a try and make it horizontal instead and also remove all the irrelevant noise surrounding it. 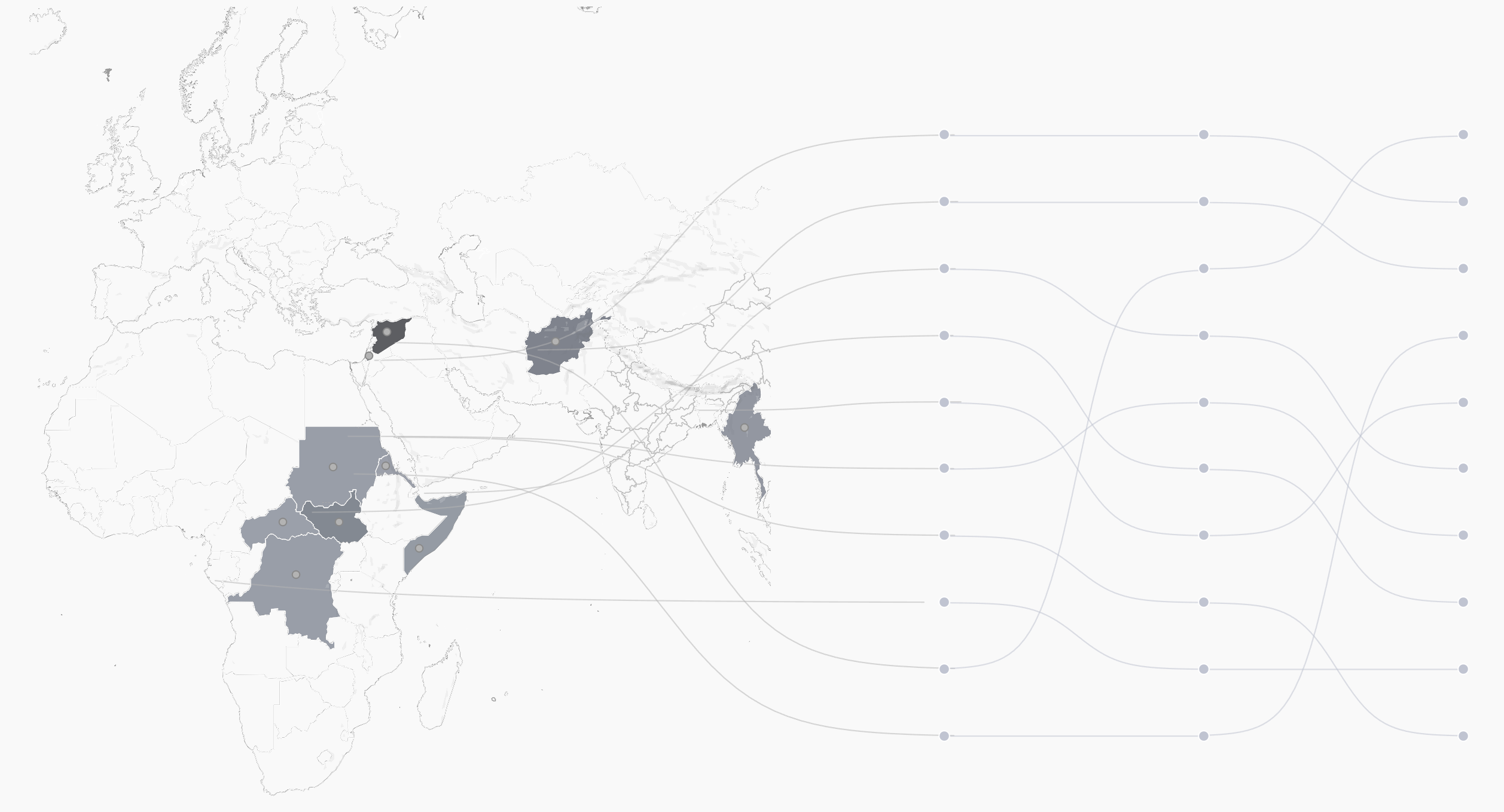 After those adjustments, the visual overload almost disappeared, and the whole piece together started to give some good sense of potential where I can make it more visually appealing. So now with the functional part of the chart working, I stopped working on it to be designed later on with other charts, so everything would have eventually a consistent look and feel.